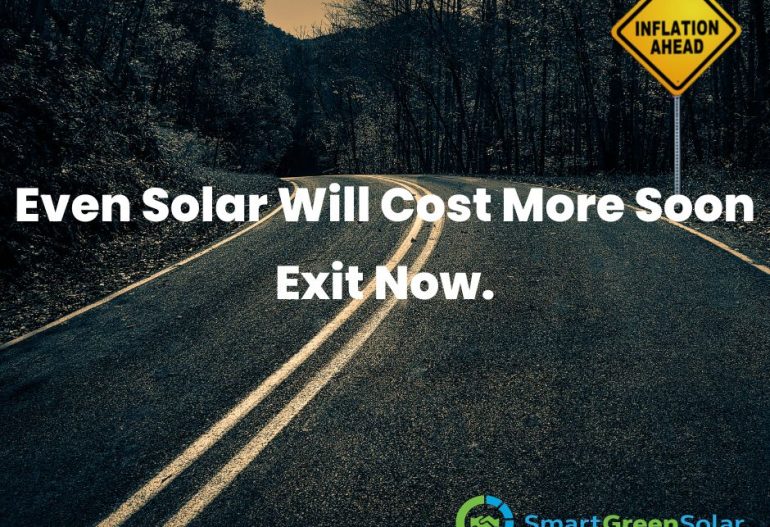 News October 4, 2022 solaradmin Comments: 0
Solar Is About To Be More Expensive

Every once in a while, we have a narrow window of opportunity. Homeowners are in such a window right now with solar energy.

Because of generous tax incentives and state programs, solar is the most cost effective alternative to fossil fuel power. But rising interest rates and energy prices will soon impact even solar. While it will remain the best option by far, it will nonetheless get more expensive. This is for a few reasons.

First, consider interest rates. If you’ve been following financial news, you know that the Federal Reserve has been steadily raising interest rates in an effort to combat inflation. That, of course, impacts everyone else. Banks are forced to raise their interest rates and suddenly money is “more expensive.” In other words, it costs more to borrow. But how does this impact solar?

Most solar customers choose to finance their system over 25 years. Doing so, they swap out their electric bill for a smaller solar payment, saving money instantly and working toward the day when they will own their power outright. However, with interest rates rising, the amount of those savings will be smaller soon. Make no mistake, the savings will still be significant. But they definitely won’t be the same as they are today.

Another reason solar is about to be more expensive is the rising energy costs themselves. As electricity continues to rise in price (47% in Rhode Island; 64% in Massachusetts), so will the cost of any source of electricity (like solar panels). Its simple economics. Solar panels are not your typical technology that decreases in cost overtime. Because it is directly tied to a commodity (electricity), as that commodity gets more expensive, so will the panels that produce that commodity.

Right now, there is this short window of time before solar starts to climb in price. We predict we have one more month before we start seeing some serious increases. If you’re planning to go solar at some point, there won’t be a better time than now.

Book a consultation with a solar advisor today.