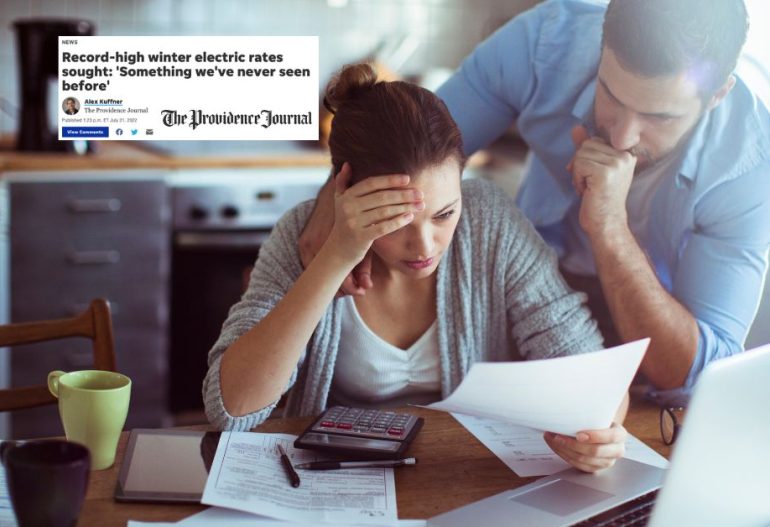 Rhode Islanders are facing a crisis. Electricity rates are rising nearly 50% on October 1st. Getting to specifics, if your average electricity bill is $150, it is about to jump to $220. That is a 47% increase. At 17.8 cents per kilowatt, this rate will be the highest on record. It is more than double the rate that has been in effect since April.

Natural gas and coal are rising for two reasons right now. As the American economy rebounds from the pandemic, there is greater demand for these energy producing fuels. Energy is the fuel of our economy. As the economy ramps up, so does energy demand, and so do energy prices.

The other major reason for the price increases is related to Russia’s war in Ukraine which has kicked off an energy crisis in Europe as those countries turn away from Russia to meet their energy needs. This has increased demand from other parts of the world, raising the prices of coal and natural gas in the global market.

That said, the rate increases we are seeing today will likely serve as a catalyst for more homeowners to make the switch to solar. Not only is personal power production the future but, because of the dramatically rising costs of the old system of energy production, that future is coming even faster now.

If you haven’t made the switch yet, reach out to us. Generous new tax incentives and state programs make this the best time to go solar. Most customers pay nothing out of pocket and begin saving money from day one. The only regret we hear is,“I wish I’d done this sooner.”

Book a consultation with us today.

October 4, 2022
Solar Is About To Be More Expensive