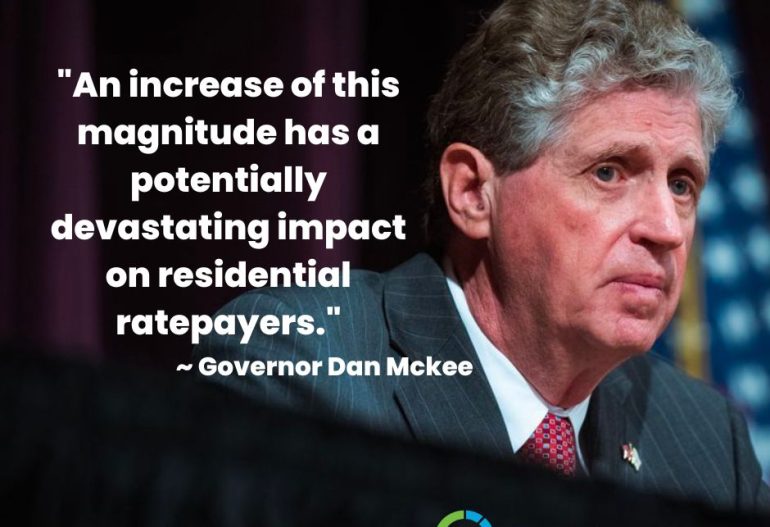 With Electricity spiking almost 50% this winter, the Governor has scrambled to find solutions. Meanwhile, citizen advocates demand Rhode Island Energy bear some of the pain.

Governor Dan McKee previously wrote to Rhode Island’s Public Utilities Commission proposing multiple initiatives to help ease the pain of residential ratepayers. These proposals include the use of $32.5 million in bill credits from the Attorney General’s settlement with PPL to offset utility costs over the winter months.

The Governor has also put together a plan to use nearly $4 million from the Regional Greenhouse Gas Initiative to offset the rate increase for low-income households.

This unprecedented rate increase is a straight pass through of costs. By law Rhode Island Energy is forbidden to profit from energy sales. They make their profit on distribution.

Even though Rhode Island energy is not profiting off the increase, community advocates are arguing that the company should bear some of the pain by cutting into their profits.

State Rep. David Morales has said, “Rhode Island Energy is trying to justify their record-level rate hikes by saying the market costs for energy are increasing due to inflation, therefore we, the community, have to take on the economic burden. And I say no. Instead, what we are demanding is that Rhode Island Energy directly absorbs some of these increasing energy costs.”

For their part, Rhode Island Energy has supported the plan to use the bill credits, as proposed by the Governor. Additionally the company points to discounted rates, budget billing and payment assistance plans as methods that will provide some relief over the winter months.

As Governor Mckee wrote in his letter to the Public Utilities Commission, “in the face of an unprecedented, temporary rate increase, we must work collectively to do everything possible to maintain the affordability of energy during this coming winter.” At Smart Green Solar we are doing our part to help.

We believe problems like this are not going away. They are only going to get worse. We don’t just need solutions that ease the pain. We need systemic solutions that eliminate the pain. Renewable energy, especially solar energy, is the future of energy production. Solar energy is abundant, reliable and free of the political and socio-economic factors that drive the rising prices of fossil fuel energy.

This problem is going to be with us well into the future. We have the solution today.

Book an appointment with a solar advisor to see what solar can save you.